My holiday tradition started many years ago when I worked at a hospital outpatient pharmacy.  Day after day I would see patrons coming in feeling physically horrible. Generally, they were coming in because they had seen a physician for an issue and were filling a prescription afterward.  Our facility also delivered medication to the same-day surgery ward. 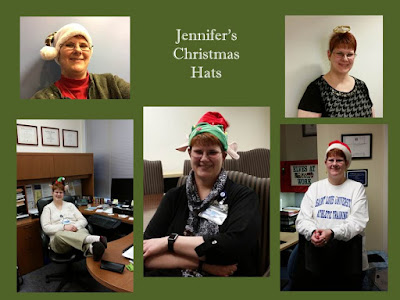 One year, as the holiday season approached, I asked the pharmacist if I could wear a Santa hat to try to bring a little bit of holiday cheer to the place. He agreed, and the patrons seemed to get a small lift in their day when they saw the hat and a smile. The next year, I continued my Santa hat routine, but I added some reindeer antlers to the mix.  I received the same type of reaction – a slightly brightened day. It’s what I was going for, so I was pleased.  The following year, I went all out. I wanted to make people laugh. It may be the only time they had laughed (or would laugh) in quite some time.  Even a chuckle would be considered a win. So, I started my task…to find some of the most fun, most silly holiday hats and headbands I could find. 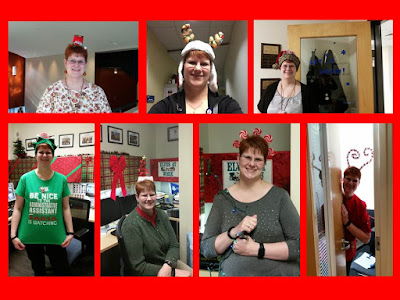 I didn’t do it all in one year. I got a few the first year, a couple more the next year, and so on. I’ve even had some friends and family buy me crazy holiday hats when they see them. Currently, I have enough holiday hats and headbands that I can (and do) begin wearing a holiday hat on December 1st and wear a different one every single day through Christmas! It takes commitment. You can’t put on a holiday headband and then decide to take it off half-way through the day. Not unless you want to walk around with a divot across the top of your head, that is.  And the dancing and singing hats…oh are they fun!  They make everyone smile and giggle!  But I always have a weight on my shoulders while I’m wearing them – literally. They are heavy. The motors and batteries in those hats make them weigh quite a bit and I end up with a sore neck and shoulders after a day in one of those hats.

It’s been more than fifteen years since I started with that I first starting wearing that Santa hat, and I wouldn’t change the way things have gone for anything in the world!