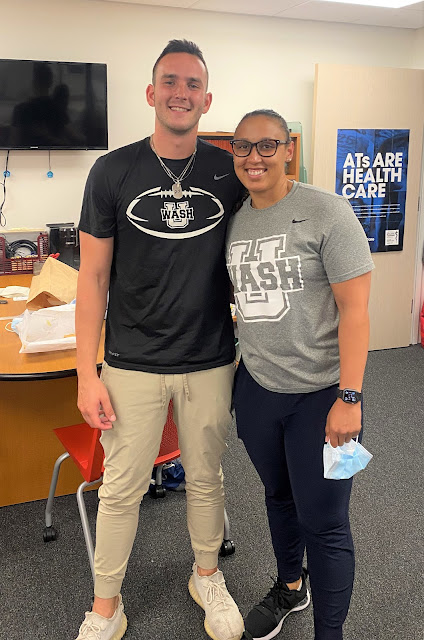 SLU AT Clinical Site Spotlight - Washington University Athletics
By: Mason Remeis (MAT Class of 2023)
This semester I have returned to Washington University in St. Louis primarily primarily with football responsibilities, but it looks much different than it did a year ago.  The Head Athletic Trainer from last season took a new position at a new university and we are currently in a transition, so there is currently not an athletic trainer on staff who is solely in charge of the football team.  On top of that, there is only one other student who is working with the team for the time being.  That being said, we have been able to make things work.  There are two ATs on staff that both help out the football team during practices, games, and treatments.  It was interesting to see how the players reacted to having to work with new ATs.  It seems like the players were able to get comfortable and gain an overall trust pretty quickly.  As for me personally, since I was there working with them last year, I already had a relationship with most of the players so the transition back was very easy.  I do find it beneficial though to get to work with the other ATs more now and see how they tend to treat certain injuries or how they run things. 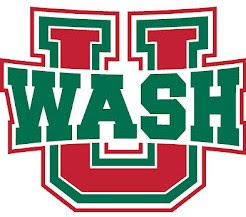 The typical day consists of coming in for treatments, setting up the field for practice or game, taping, being out on the field during the practice or game, and ending with post-practice treatments.  Now that I am in my second year in the graduate school program, and also due to there not being one designated AT for the football team, my overall responsibilities have increased.  I have continued to set up and assist with different modalities that I have already had a lot of experience with, but have also gotten to work with some other modalities that I haven’t necessarily worked with as much.  The most common treatments include e-stim, Game-Ready, and Graston.  I have gotten to work with the underwater treadmill, and set up other e-stim variants like Biowave or Marc Pro. I also have been able to evaluate injuries and then create rehab plans for the athletes.
I have consistently seen my responsibilities increase each semester of clinicals up to this point.  A lot of it has to do with me being further down the line in school and experience, but also I have done a good job of gaining the trust from my preceptor and the players to where I am able to be fully hands on and be in control when an injury occurs or when an athlete comes into the training room.  I continue to learn more about what I need to work on and I have also seen growth in my overall skills.  This experience has been very beneficial so far and I expect that the semester will just continue to improve as the season moves forward.
This is one of a series of posts by the Saint Louis University Athletic Training students featuring their clinical site and their preceptors. The number, quality and diversity of clinical instruction are major assets for the SLU AT Program.