Not so long ago, when an athlete was dizzy from being conked on the head in a game or practice, his coach would often tell him to shake it off. "You got your bell rung," was a common sideline diagnosis.
This month, the Missouri Legislature took a step toward putting that way of thinking to rest when it passed the "Interscholastic Youth Sports Brain Injury Prevention Act."

Now, athletes who are suspected of having a concussion or brain injury during practice or play must be sidelined immediately and not allowed back on the field for 24 hours. They must also be analyzed by licensed health care providers who are trained in evaluating and managing concussions to get a written clearance to play.

"I'm a late '70s football player, and they didn't even think of those things. It was just get up and go back in," said Harvey Richards, associate executive director of Missouri State High School Activities Association, which helped write the legislation.

The act also requires mandatory education of coaches, athletes and their parents about the signs and symptoms of a concussion and the possible long-term effects of playing with one before the season starts. In addition, it calls for the creation of a coalition of groups to collect data and publish a report each year about the long-term impact of concussions and head injuries on student athletes. Several other states have passed similar legislation.

Both chambers of the Illinois Legislature have passed versions of a similar bill and are now working out differences.

Nathan Wilmes, director of sports medicine for Excel Sports Physical Therapy in St. Charles, likes the precision of the Missouri law's language.  "I've had experiences where athletes will doctor-shop to find one who'll clear them to play in two or three days because some doctors aren't trained in concussion management," he said. "It's really kind of scary."

Young athletes are bigger, stronger and faster today than ever before, making for more forceful impacts during collisions. And in football, helmets offer a false sense of security.

According to a study published in the medical journal Pediatrics last year, concussion rates among athletes ages 18 and under more than doubled from 1997 to 2007. The Centers for Disease Control and Prevention estimates that 3.9 million concussions related to sports and recreation occur nationwide each year.

On top of that, growing evidence shows an increased risk for degenerative brain disease in athletes who have had multiple concussions.

Anthony Breitbach, director of the athletic training education program at St. Louis University, said the new law is a move in the right direction, but he worries about the soccer player who's dizzy when she gets up from a play, but doesn't tell anyone.

Athletic trainers on sidelines during practice and games can detect a lot of concussions that would otherwise go unnoticed, he said. But not all schools hire athletic trainers.

Excel, which hires out (athletic) trainers, now administers a Standardized Assessment of Concussion test that measures the memory and cognitive skills of football players before the season starts. They give the test again on the sideline when they suspect players have suffered concussions during play or practice to see whether their scores have changed dramatically. It also helps them gauge changes from season to season.

"When I watch a play, I don't care what happens as far as getting a touchdown or scoring," Breitbach said. "I watch how they go to the ground and how they get back up. That determines what questions I'll ask them as they come to the sideline."

Richards said he's heard people express concerns that parents or kids may hide a concussion, because they don't want to be sidelined. "We have to be diligent in letting them know that missing that one play, or even the next game or two games, is not more important than how you live the rest of your life," he said.
Each player must now read and sign an information sheet about concussions and have their parents do the same. Richards believes that will help.

WHAT HAPPENS TO THE BRAIN?

Medical experts are not sure yet what happens inside the brain when it suffers a concussion.
"We are concerned that younger kids have developing brains, and we don't know if they take injury differently," said Dr. Mark Halstead, director of the sports concussion clinic at Washington University. "We do know that the amount of recovery time is longer for young adults, so there's a difference in the way they tolerate injury."

They also know that continuing to play with a concussion makes a young athlete vulnerable to greater injury and even death should they suffer another jolt to the head.

Most research on sports-related hits to the head have focused on NFL players.

The Center for the Study of Traumatic Encephalopathy at Boston University has found the same neurodegenerative disease in more than 20 deceased players, including former Chicago Bears player Dave Duerson, 50, who died after shooting himself in the chest in February.

What little research that has been done on younger athletes has found that pulling them off the field after a concussion may not be enough.

Last fall, the same researchers at Boston University reported that the brain of Owen Thomas, a University of Pennsylvania football player who hanged himself in April 2010, also showed signs of degenerative brain disease.

The researchers seemed stunned when interviewed for a PBS "Frontline" report, because Thomas was only 21 and had no known history of concussions.

In 2009, researchers at Purdue University equipped the helmets of 21 high school football players with sensors, and compared the impact data from them with brain-imaging scans and cognitive tests performed before, during and after the season.

Many of the players who did not suffer concussions performed increasingly worse on cognitive tests as the season wore on. And those who put their head down and took blow after blow to the top of the head were most impaired.

"We're looking at very sensitive organ of body and the nervous system," Richards said. "You don't even have to have a collision, it can be whiplash. Helmets don't protect against that. They're made to stop you from getting a skull fracture."

Football players run the highest risk of getting a concussion, but other athletes aren't impervious to them. In fact, Richard says, female athletes — particularly in soccer and basketball — run a higher risk of concussion than men in other sports because of a physiological difference.

"The male gender has a stronger neck which helps avoid some of these concussions," he said. "In female sports, when you're going backwards and fall and hit the ground, and your head snaps, you're essentially do the same thing as a guy playing football."
No comments:

They are taking 2 classes this summer:  ANAT 400-Gross Anatomy and MAT 501-Principles of Athletic Training.  The Department of Physical Therapy and Athletic Training sponsored a luncheon in the Multipurpose Room of the Allied Health Building on Wednesday, May 25, 2011 to welcome the AT & PT students to their respective professional phases. 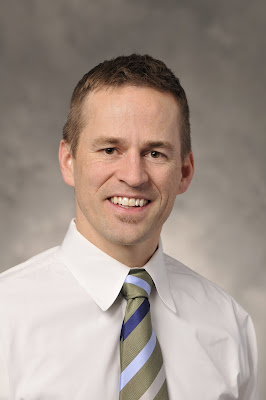 This project is the culmination of his study in the doctoral program at Rocky Mountain University of Health Sciences.  The Doctor of Philosophy degree specializing in Orthopedics and Sports Science will be conferred by Rocky Mountain this summer.

Upon conferral of the degree, all of the core faculty members in the Saint Louis University Athletic Training Education Program will have doctoral degrees.  Jason teaches the Musculoskeletal Assessment sequence in the SLU AT program in addition to serving on courses in the SLU Program in Physical Therapy.  He also has a clinical practice at the SLU Student Health Center.

Saint Louis University's Doisy College of Health Sciences held its precommencement ceremony on Thursday, May 19, 2011.  This is the ceremony where the graduates are recognized individually and is also where the MAT graduates were given their Master's hoods.  After the ceremony, the SLU AT Education Program hosted a celebration dinner at the Mamma Mia Spaghetteria restaurant near the SLU campus.
No comments:

Mollie Cole, a member of the Saint Louis University Master of Athletic Training class of 2011, wrote a children's book about the profession of Athletic Training.  It is titled "What's in Your Fanny Pack?" and it served as her capstone project.  It is available to be view as an ebook or it can be purchased as a paperback book through Bookemon.  Click HERE to access the book on the publisher's site.  Mollie previously received a Bachelor's degree in Biology and a Master's degree in Education from the University of Missouri-Columbia. She also served as a classroom teacher for two years before entering the SLU AT Education Program.  She is moving on to a position in the residency program at the Ben Hogan Sports Medicine in Fort Worth, Texas. 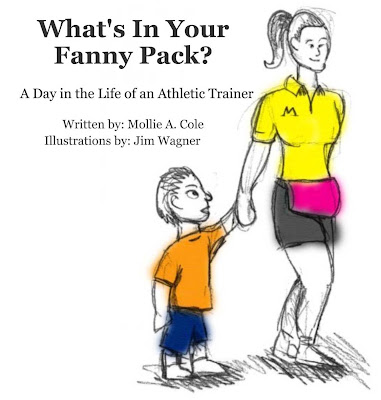 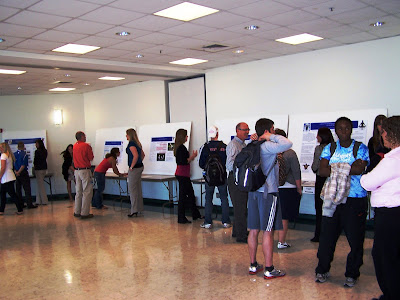 On Friday, May 6, 2011, the Saint Louis University Master of Athletic Training Class of 2011 made a public presentation of their capstone projects in the Multipurpose Room of the Allied Health Building.  These capstone projects, mentored by Dr. Kitty Newsham,  provide students with a culminating scholarly experience during their last semester in the program. 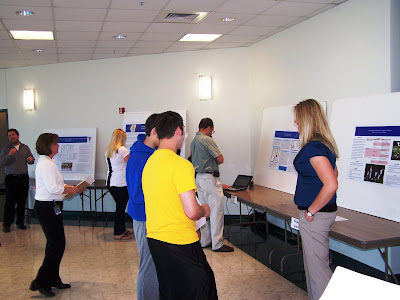 On Wednesday May 4, 2011, Saint Louis University Athletic Training Students worked together to conduct a lifelike simulation where they manage a catastrophic football injury using the (METI) Human Patient Simulator in the Clinical Simulation Lab on the Medical Center Campus at SLU.  The manikin they used created an extremely accurate representation of the experiences they would have in managing this type of situation.  For more information about the Clinical Simulation Lab go to: http://oca.slu.edu/index.php?page=life-support-skills-center---simulation

Faculty members Tony Breitbach and Jason Bennett worked with School of Medicine Education Specialist Wesley Burch to develop a scenario where a group of students managed a football player with a possible cervical spine injury.  During the simulation the patient stopped breathing and lost his pulse.  The students had to work together to: position the patient, manage the equipment, treat the patient and prepare the patient for transport.  The students were observed and videotaped. A debriefing session was conducted afterwards to review their performance and recommend improvements for the future.  This is an invaluable resource to have for our students.