SLU AT Students Team Up to Practice Managing On-Field Emergencies 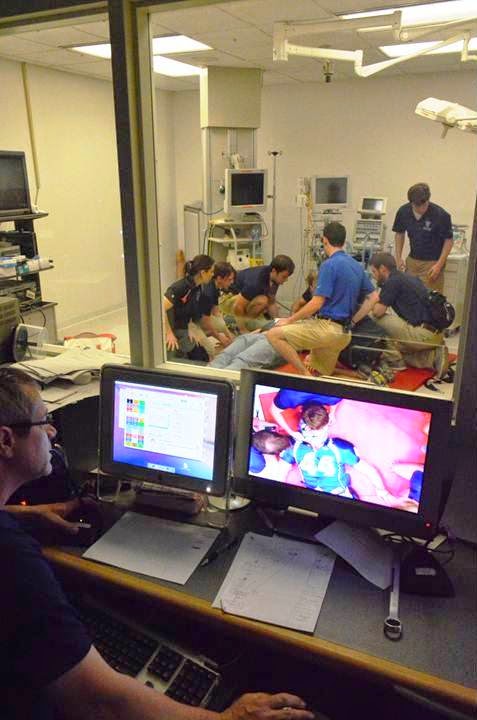 On April 22nd and 23rd, 2014, Saint Louis University Athletic Training students from the first and second year of the professional phase of the program teamed up to manage a scenario that simulated a football cervical spine injury that included cardiac and respiratory arrest. These students and SLU AT faculty utilized the outstanding facilities at the SLU School of Medicine's Simulation and Clinical Skills Center in an exercise to prepare for on-field emergencies.   The center features high-fidelity clinical simulators which are designed to prepare health professionals in the management of all types of trauma and injury.  They can be programmed to simulate many different conditions including cardiac and respiratory problems. 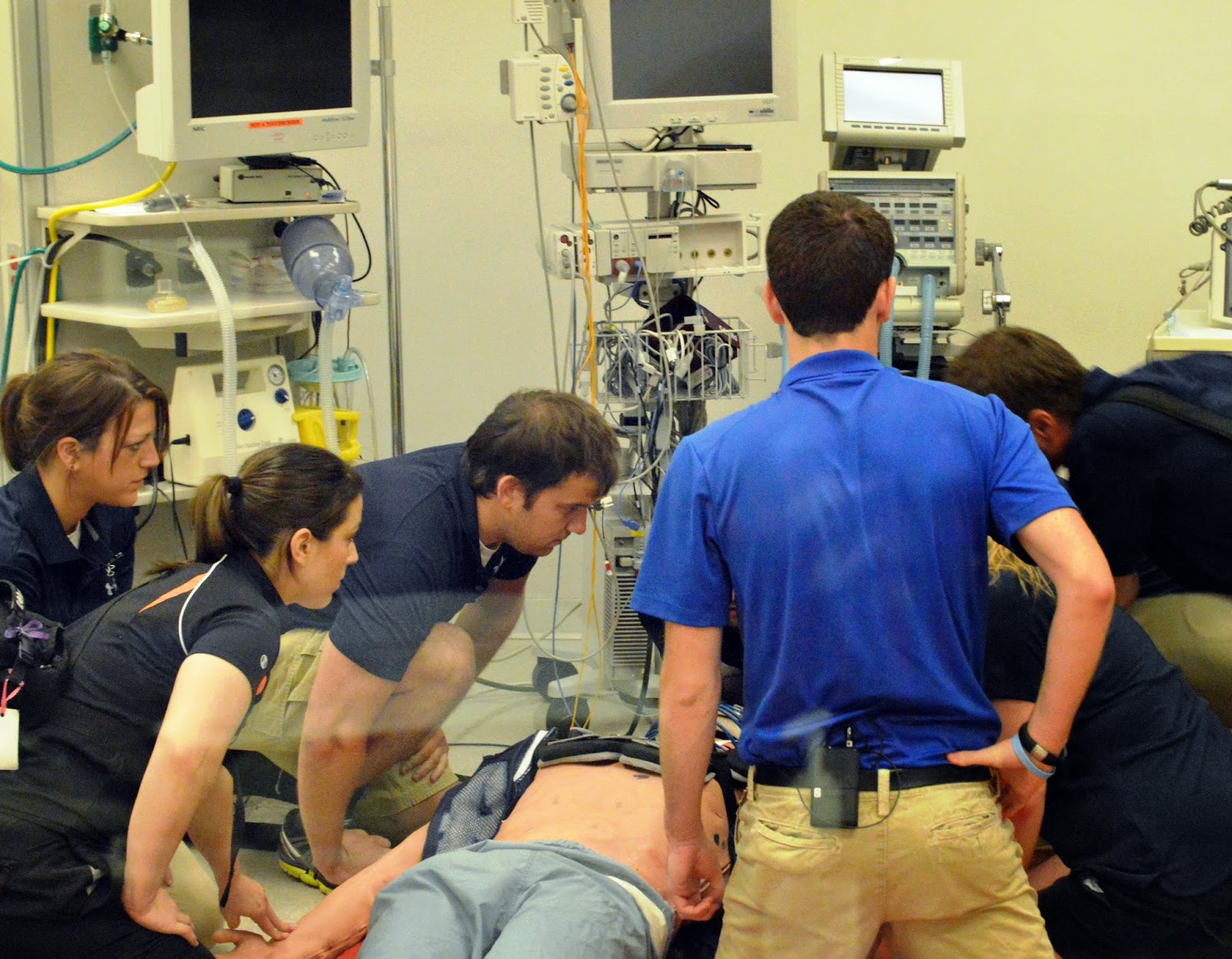 Seven person teams were responsible for determining professional roles and a management plan which they practiced in lab prior to the simulation. They were video recorded in the scenario which included a primary and secondary survey and acute management of the injury in a football player.  It also included transportation of the patient using a spine board.  Faculty members Kitty Newsham PhD, ATC and Katie Leible MS, ATC provided feedback and conducted a debriefing using the video with the teams after they completed the scenario. Experiences and resources such as these are invaluable in the professional development of the SLU AT students. 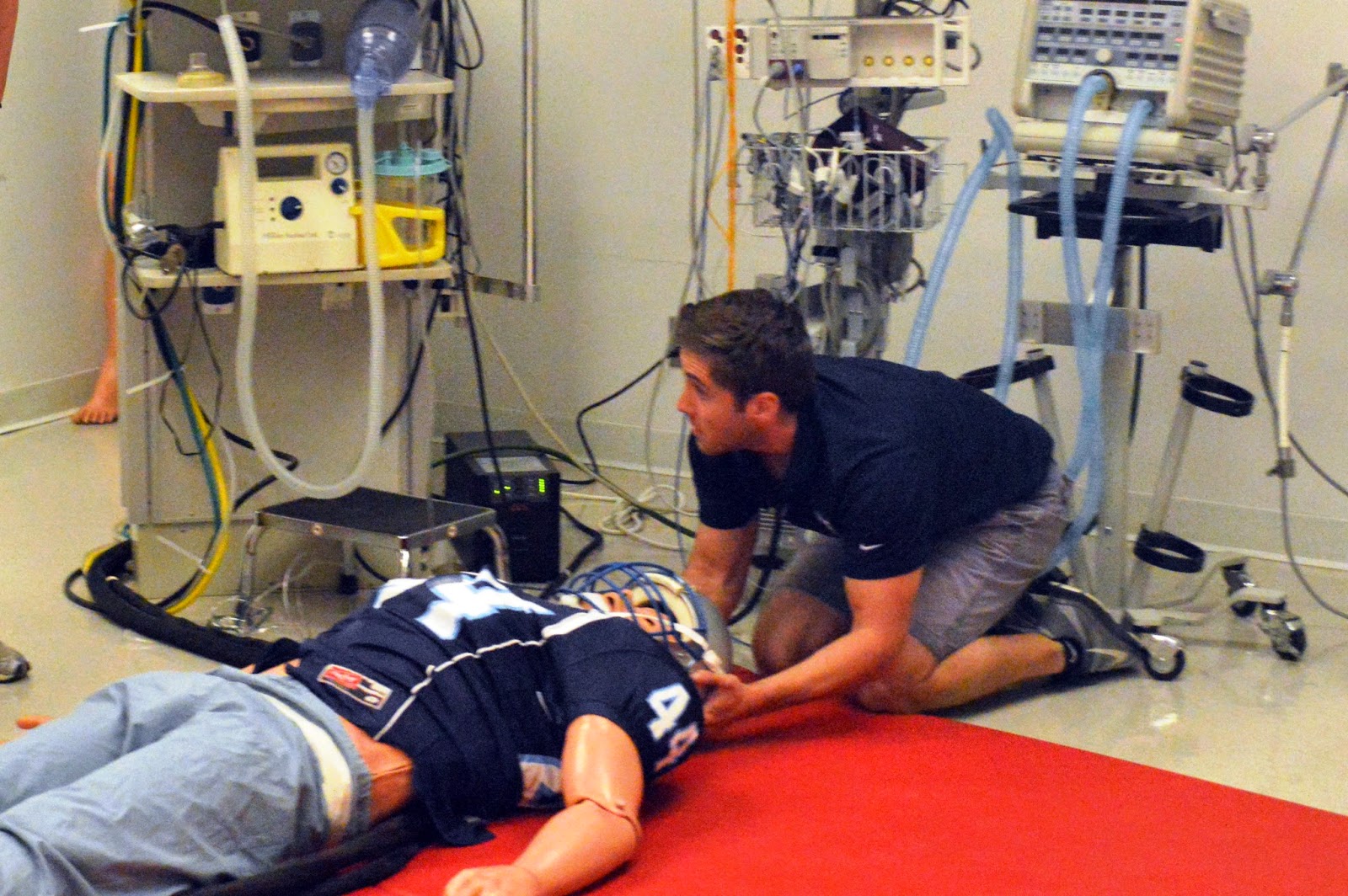 Saint Louis University Athletic Training Student Nygel Williams (MAT Class of 2016) was featured in a story in the SLU magazine "Universitas".  The article featured Nygel's experience at SLU and how the "Go Further" campaign and the Bob Bauman Endowed Scholarship in Athletic Training looks to benefit our AT students. 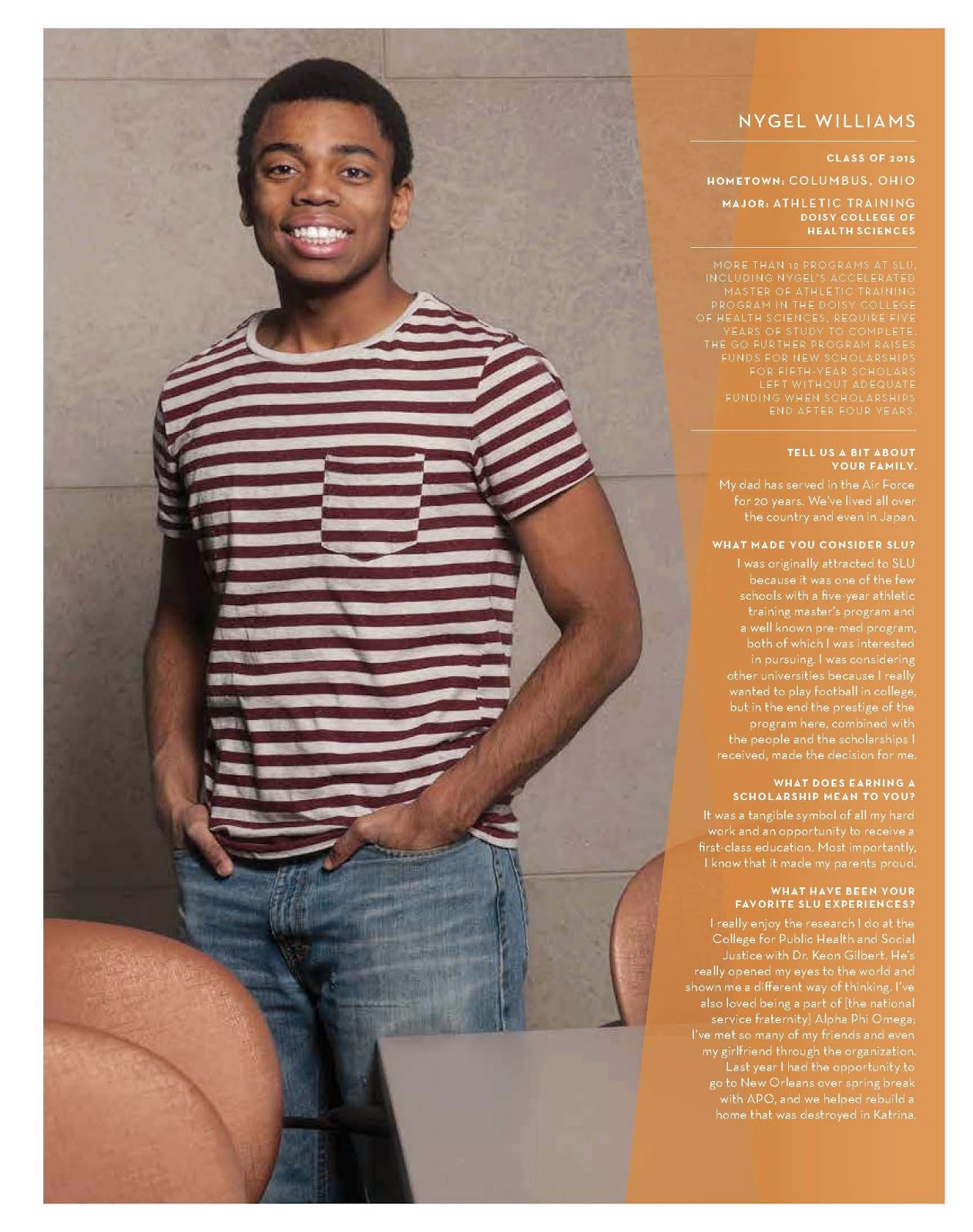 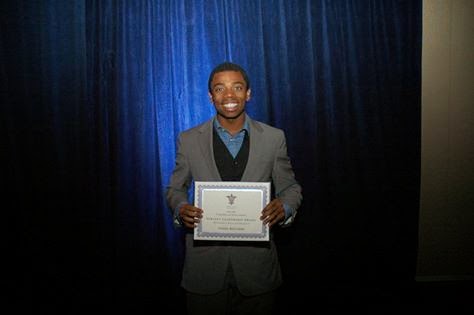 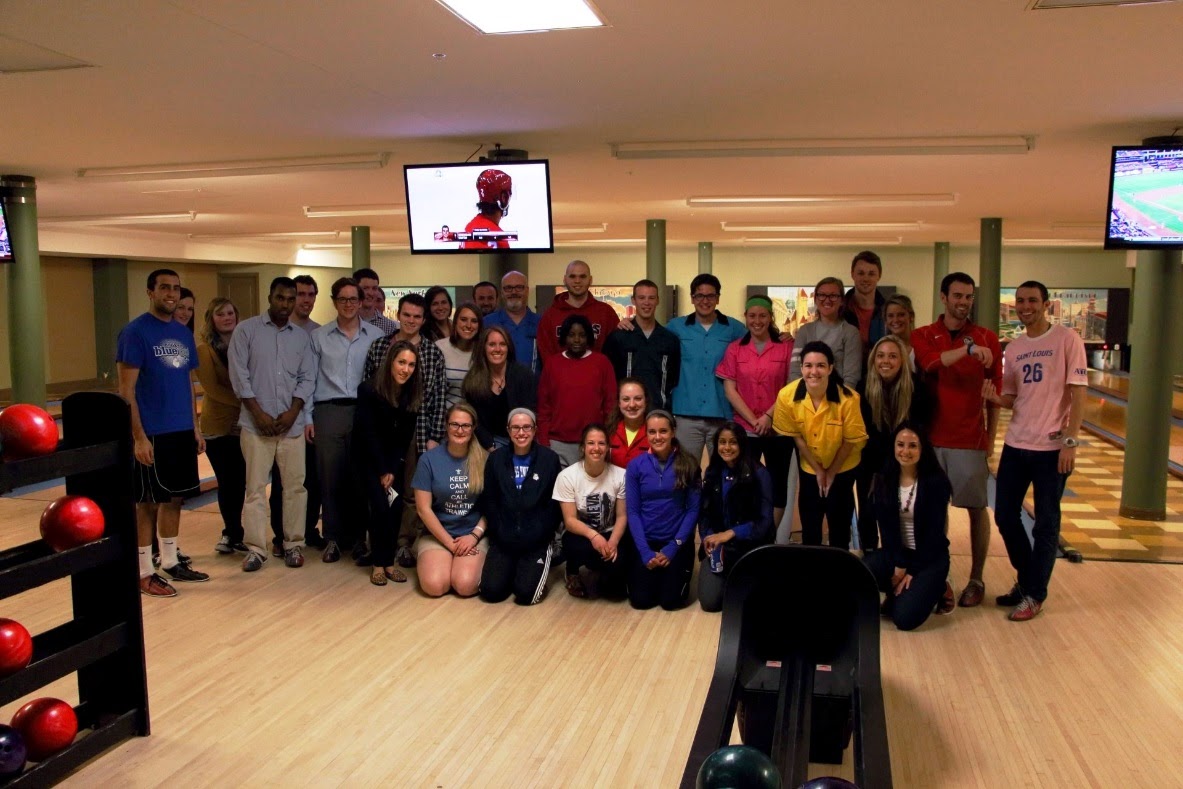 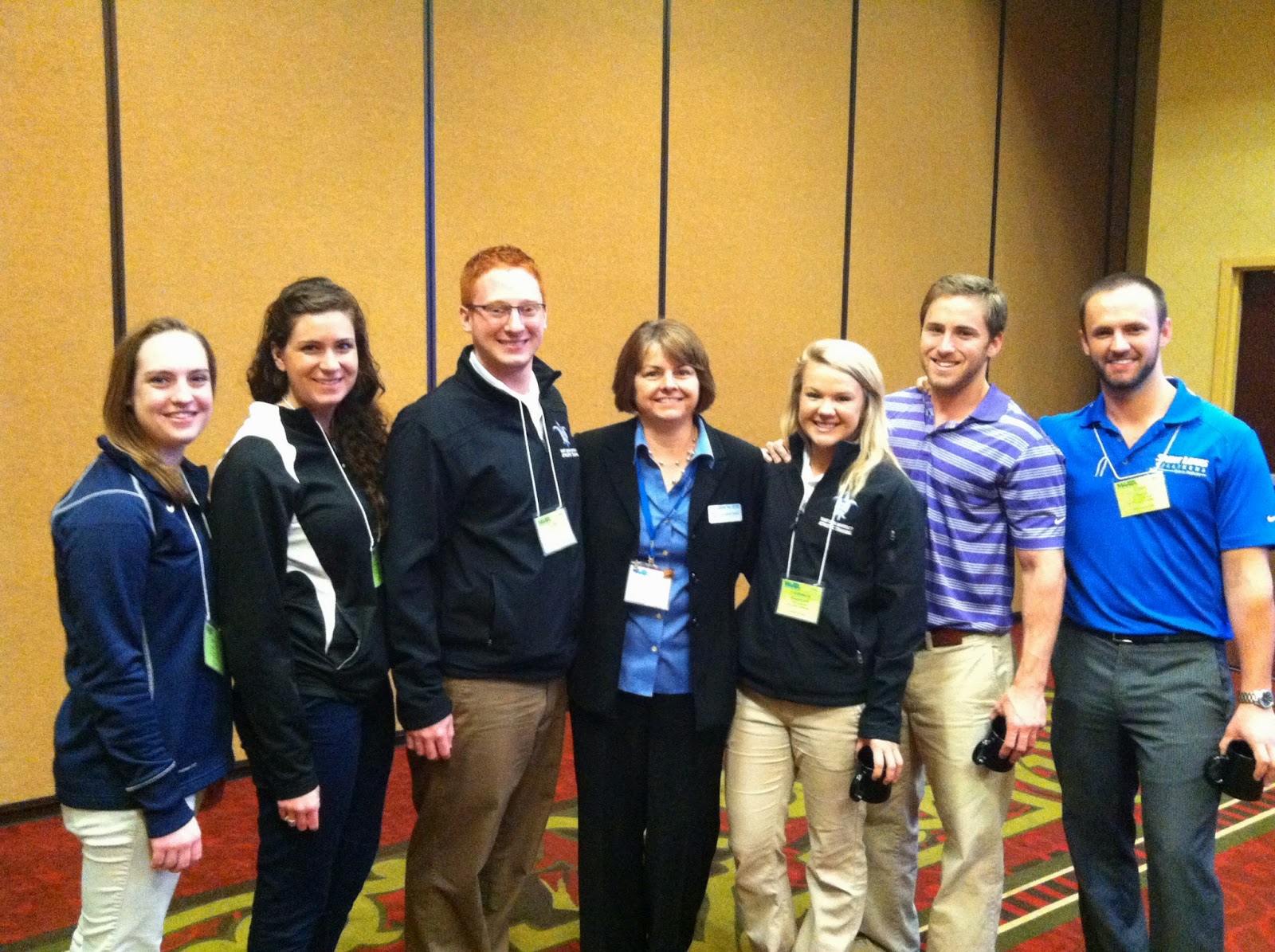 The Saint Louis University Athletic Training Program had six athletic training students along with faculty members Kitty Newsham PhD, ATC and Tony Breitbach PhD, ATC traveled to Des Moines, Iowa on March 27-29, 2014 to represent the program at the 35th Mid-America Athletic Trainer's Association (MAATA) Annual Meeting and Symposium.  Tyler Wood, Cat Costello, and I represented the Missouri Athletic Trainers' Association (MoATA) in the District Quiz Bowl competition after previously taking home the state title at the MoATA conference earlier in the year. We gave a valiant effort, but we fell short of our goal of reaching the finals of the Quiz Bowl, which is held at the National Athletic Trainers' Association Annual Meeting this upcoming summer in Indianapolis, Indiana. 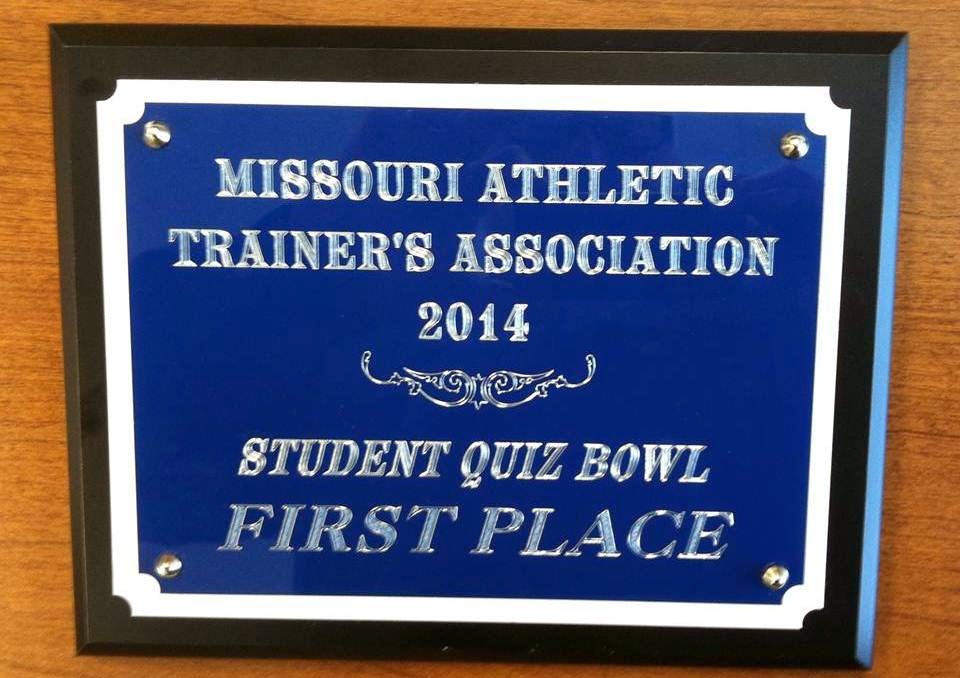 While there, we were able to attend a number of lectures discussing various topics in athletic training, including talks on drug interactions and concussions.  One of the talks given that we were able to attend was on food and exercise-induced anaphylaxis by Dr. Newsham, one of the faculty members in attendance from SLU.  Not only did we have the opportunity to attend these lectures, but we also attended the MoATA meeting.  We were able to hear and get an update on the athletic training related events that are happening in state.  One topic of interest for many of the students was the young professional group.  With graduation approaching shortly, this young professional’s group is a great way to network and meet other professionals in the field who are also trying to start their careers. 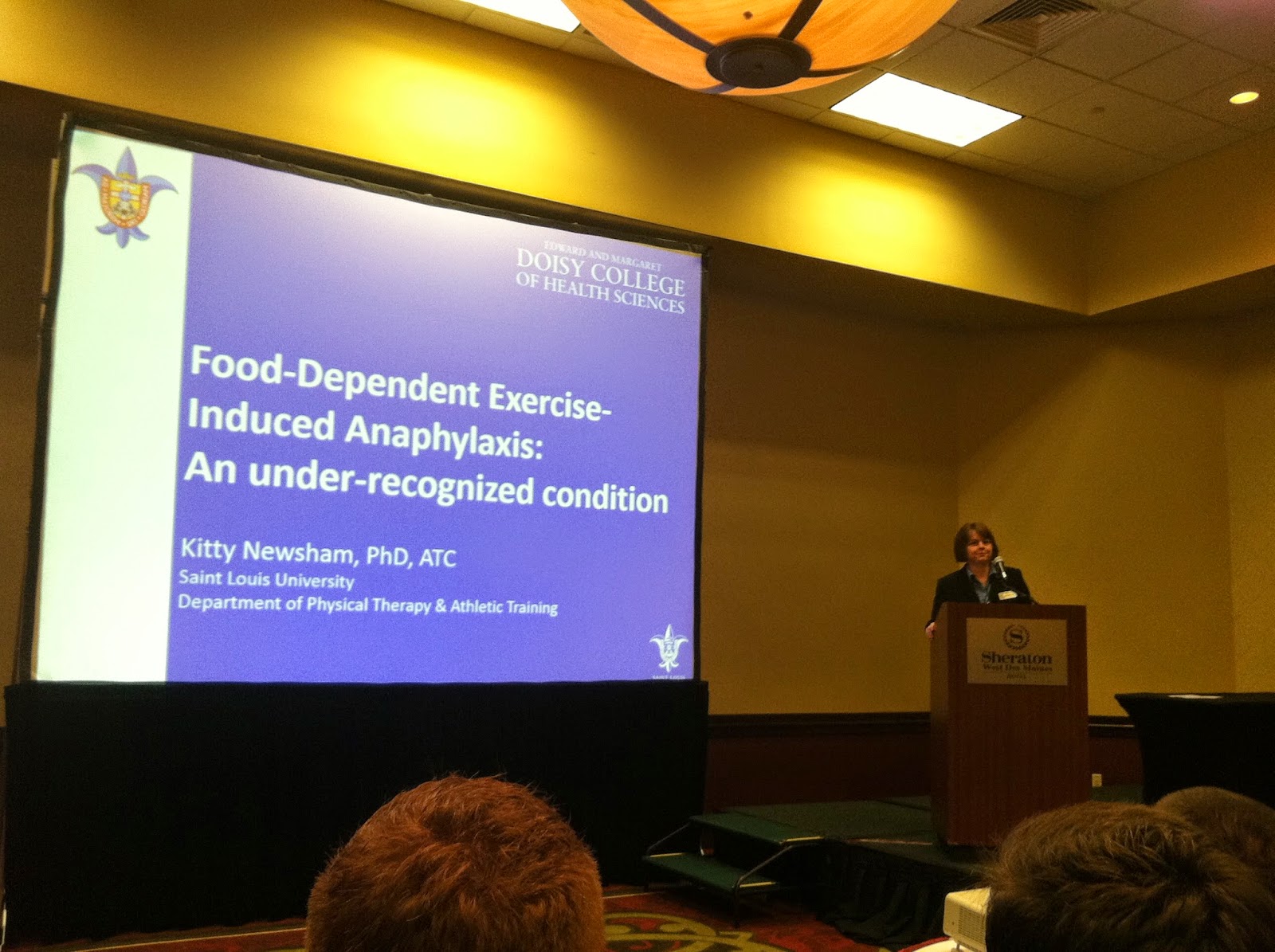 Overall, the MAATA symposium was a great experience!  We were exposed to a number of items for the first time in this type of setting.  We were given the opportunity to meet professionals within athletic training, hear multiple talks on differing topics of athletic training, and represent SLU AT Program in the Quiz Bowl. We would not have had these wonderful opportunities without attending the symposium. 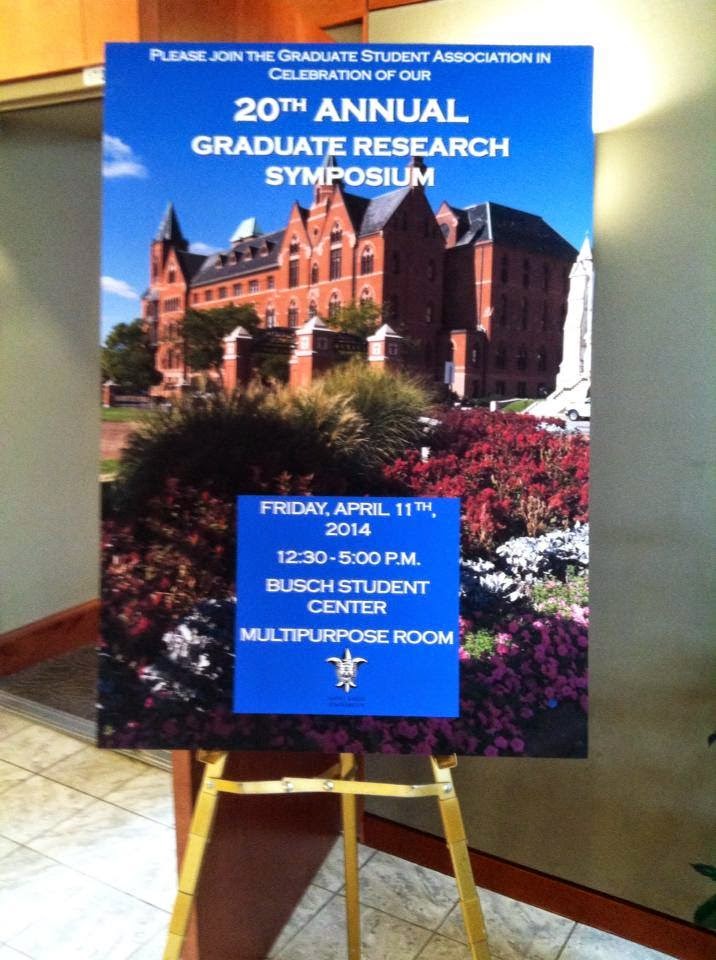 Emily Grace (SLU MAT Class of 2014) presented her MAT Capstone Project entitled: "Management of Recurrent Exertional Compartment Syndrome in a Competitive Collegiate Women’s Volleyball Athlete" as a poster at the 2014 GSA Graduate Research Symposium at SLU's Busch Student Center on Friday, April 11, 2014.  She and her classmates will all be making public presentations of their capstone projects on Friday, May 2, 2014 from 8:00 am -12:00 noon in Room 1036 AH on the Medical Center Campus.  For more information about attending MAT Capstone Day contact 314-977-8561 or atep@slu.edu.

The SLU Graduate Student Association's Graduate Research Symposium is held each year during the spring semester. This year's symposium marked it's 20th annual year. This is the second year in a row an AT student presented in the symposium. 2013 MAT graduate Bridget Quirk MAT, ATC presented at last year's event.

The GSA Graduate Research Symposium is an event open to all SLU graduate students. Every department with graduate degree programs is encouraged to participate in this interdisciplinary forum. Each year's paper and poster presentations are divided into categories based on the distribution of the participants. Judges are selected from SLU faculty to represent the variety of disciplines.