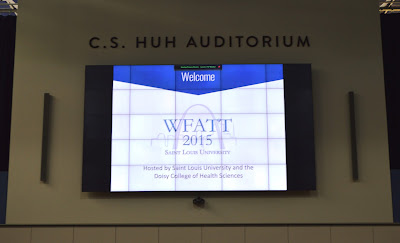 Saint Louis University and the City of St. Louis welcomed colleagues from around the world during the week of June 20-27, 2015 in an outstanding week of fellowship and professional development!

The 2015 World Congress of the World Federation of Athletic Training and Therapy took place on the campus of Saint Louis University with a theme of "Overuse Injury in Sport, an Interprofessional Approach".  The outstanding program included keynote speakers Dr. Jill Cook from Victoria, Australia and Dr. Scott Reeves from London, England.  The Opening Ceremonies took place in SLU's Center for Global Citizenship and a Gala Dinner was held in the Allied Health Building's Multipurpose Room.  Check out photos from the WFATT events here: https://www.flickr.com/photos/slu_healthsciences/sets/72157654440358478

The 2015 National Athletic Trainers' Association Clinical Symposia and AT Expo was held at America's Center in downtown St. Louis.  The Saint Louis University Athletic Training Program was active in the event.  Faculty members Dr. Kitty Newsham and Dr. Anthony Breitbach made presentation at the event.

The SLU AT Program was also mentioned in the NATA Press Conference on its upcoming partnership with the NFL, the St. Louis Rams, Athletico and the St. Louis Public Schools. The week was capped off with the SLU AT Alumni Party at Rosalita's Cantina with over 65 alums and friends in attendance.
This was a memorable week in St. Louis, the future of the profession of Athletic Training has never been brighter!