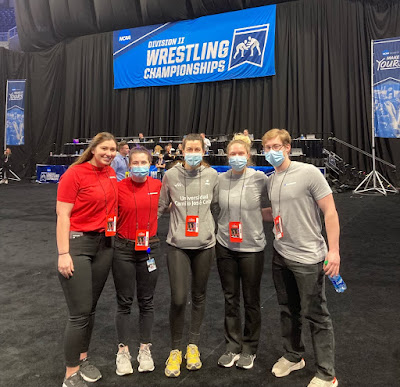 New PY1 AT Student Blog Post - Grace Golembiewski
By: Grace Golembiewski (MAT Class of 2024)
I had the opportunity to complete a handful of my direct observation hours at the DII NCAA Wrestling Championship at Chaifetz Arena from March 10th-12th, under the guidance of the Head Athletic Trainer for the event, Austin DeBoer ATC, the Assistant Athletic Trainer at Maryville University. Caroline Miller, one of my peers, and a few PY1 and PY2 students in the SLU AT program were also attending the event to acquire a unique, collegiate level, clinical experience with wrestling, since we don’t have access to wrestling at Saint Louis University. This in itself made my overall clinical experience invaluable in the sense that I was able to connect with a lot of my peers and receive advice from experienced athletic trainers at other DII programs throughout the many hours I spent at the tournament.
On the first day of the championship, I was partnered with PY1 student Eldwin Neritani for the preliminary rounds of the tournament. I had never been to such a large collegiate wrestling tournament before, so it was astonishing to see the number of matches occurring at once. Before the matches started for the day, all of the head and student athletic trainers covering the event were required to gather together in order to review emergency action plans and divide up which athletic trainers would be in charge of covering which mats. This was essential as there would be eight matches occurring at once, and some wrestlers would not have a traveling athletic trainer with them. Therefore, Eldwin, Austin, Caroline, and I were in charge of covering two mats throughout the entirety of the day. Upon listening in on this initial meeting and interaction between all the different athletic trainers, I realized how important interprofessional relationships and emergency action plans were for such a large and chaotic event such as this one. With eight simultaneous matches going on at once, and large crowds, it was very difficult to hear and see all the different athletes competing at one time. Therefore, as the athletic trainers on call, it was imperative that Eldwin and Austin were always paying close attention to the zone they were in charge of covering, and for them to be aware of where the other healthcare professionals (such as EMTs) were located around the mats in case of an emergency.
For instance, in one match, an athlete cried out in pain and grabbed his chest. Almost immediately, two head trainers were out on the mat assessing the situation, with Eldwin assisting as necessary. Together, along with the support of the head and assistant coaches of the athlete, all five personnel were able to safely assess the situation, evaluate the athlete’s injury, and transfer the athlete to the athletic training room for further inspection and optimal treatment and care. Another observation that I made about athletic training during my time at the wrestling tournament was how efficiently an athletic trainer does their job could make the difference between a win and a loss for an athlete. For instance, with collegiate wrestling, each athlete is only aloud a cumulative total of five minutes for “blood time.” This means that if an athletic trainer is not paying close attention to the match or is not prepared with the correct materials to clean and stop the bleeding, then the athlete will suffer not only in the physical sense, but also in their level of performance as well. This was made very clear to me throughout the tournament as every time there was a call for “blood,” multiple athletic trainers rushed out with the proper materials prepared to clean, bandage up, and stop any further bleeding from occurring as fast as possible. Overall, it was amazing to see how such a large group of athletic trainers worked like a well-oiled machine as they communicated and danced around one another throughout the three-day tournament.
In conclusion, there are a variety of important takeaways from my experience at the DII National Wrestling Championship which have all helped prepare me for my Professional Phase of the Athletic Training program. For instance, I am now much more aware of the importance of interprofessional collaboration and communication when working at any healthcare setting, especially at one as large as a national championship. Next, I discovered how essential it is for an athletic trainer to be organized, prepared, and have a high attention to detail in order to ensure the best possible outcomes for any emergency situations that may occur. And finally, my overall experience at this clinical site demonstrated that athletic trainers are an essential part of the athlete’s performance whether they are in an athletic training room or on the mat, field, or court.
This is one of a series of blog posts written by students entering the professional phase of the SLU AT Program as a part of MAT 3000 - AT Student Development II.