SLU AT Student Spends the Summer with the Sixers

Since 1985, the Philadelphia 76ers organization has helped more than 80,000 campers from 40 states and 30 countries improve their basketball skills at the Sixers Overnight Basketball Camp. During the month of July I had the amazing opportunity to intern as an Athletic Training Student while 800+ campers, ages 9-17, worked to improve their skill level. The camp is held at Valley Forge Military Academy and College in Wayne, PA, a beautiful suburb of Philadelphia. The Military Academy aspect may sound intimidating, but the campus was the perfect setting to host 200+ campers a week. There are 12 basketball courts on campus and plenty of housing for all the campers and staff.

I really enjoyed getting to know the Sixers Camp staff. There were a total of 14 summer interns, 5 athletic training and 9 sports management, along with the camp coaches that consisted of college players and coaches from all over the United States and Europe. Todd Landrey, Executive Director of Sixers Camps, and Paul Beckles, manager of Sixers Camps, do a great job of providing a safe, fun, and instructional environment for the campers to develop their skill sets as basketball players. While interning at Sixers Camps, I spent most of my time working alongside the other four athletic training student interns and the head athletic trainer, Mary Stein ATC. During the school year, Mary works full time as an athletic trainer for Cabrini College, located right across the road from Sixers Camps. At Cabrini, she works primarily with the women’s basketball, men’s lacrosse, men’s soccer and volleyball programs. Mary was a great role model and teacher throughout my time at Sixers Camp. She understood that the 14-hour days were long and dealing with 200+ campers can be stressful at times, but she made sure our work environment was educational and fun everyday.

Our days began at 7:30AM with setting up ice and water at each of the basketball courts. Once we were finished, we would grab a bite to eat in the Mess Hall and then head to the athletic training room to begin our morning treatments for the athletes. Our morning treatments usually consisted of taping blisters and explaining to the campers that their stomach probably hurts because they decided it would be a good idea to skip breakfast. After dealing with the morning madness, each of the interns was stationed at a set of courts throughout the day for coverage of game play. We needed to be prepared for anything and ready to help an athlete if they were injured on the court. The campers finished up their last games around 9:30PM and headed back to their rooms. Our day wasn’t over however, until we made sure all the ice and water coolers were collected and took care of any injuries that had occurred later in the day. 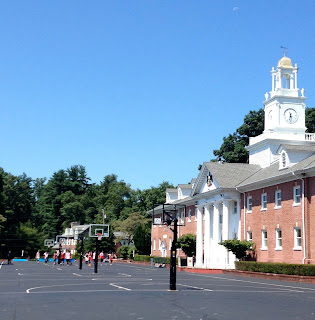 The vast array of injuries we treated helped to expand my skill set as an athletic training student. We saw everything from a tibial plateau fracture with a tibial tubercle avulsion fracture, to the common lateral ankle sprain. We also had the opportunity to accompany the campers to the ER for X-rays if we suspected a broken bone. Each day was a new and different experience and I look forward to utilizing the knowledge gained at Sixers Camps at my clinical rotation this coming year and throughout my future career as an athletic trainer.

My time at Sixers Camps was a truly unique and rewarding experience. I am so grateful to the Sixers Camp staff and head AT, Mary Stein ATC, for giving me this opportunity and helping to make the internship the best it could be.


Students in the Saint Louis University Athletic Training Program have a required internship in the summer between their two professional years in the program.  This blog post details a student's reflection on their internship experience.