SLU AT Students Get a Great Baseball Experience with the Grizzlies 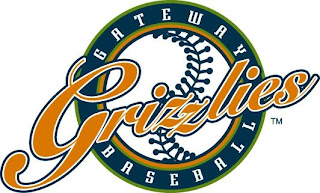 The Gateway Grizzlies are a professional baseball team located in Sauget, Illinois, a suburb of Saint Louis.  The Grizzlies are a member of the West Division of the Frontier League. The head athletic trainer for the Grizzlies is Geof Manzo, MS ATC. Geof has worked with the team for several years and is a veteran preceptor for multiple athletic training programs. He was great to work with and helped us to expand our knowledge in the field of Athletic Training.  We would arrive around 1pm on game days and stay until about an hour after the game had ended.  Geof also gave us the opportunity to travel with the team to away games a few times during the season when playing the River City Rascals, a team based out of O’Fallon, Missouri.  This was a great experience and allowed for even more time to practice our skills and work with the Athletes in a different setting.

While working with the Grizzles most of our time was spent in the athletic training room, on the field, and in the dugout.  The athletic training room was fairly small and compact containing only 3 tables to work with the athletes, the home and away locker rooms, a workout facility for in-house rehabilitation, as well as two offices for the coaches.  Although small, everything was very organized and easy to use. The Gateway Grizzlies provided a great facility to learn and practice multiple therapeutic modalities.  We were able to practice modalities such as electrical stimulation, Combo, hot packs, ice, massage and stretching.

A typical day with the Grizzlies began as soon as we arrived around 1pm.  The first thing we were assigned to do was to fold towels and prepare the opposing teams athletic training room before they arrived.  We would then begin treatments and rehab with players who needed it until around 3:30. At this time we would help with stretching and warm-ups for the pitchers, followed by the position players around 4.  It was then time to head to batting practice until about 5:15 where we then would head back to the athletic training room for last minute treatments until 6:30. We then would head to the game, sitting in the dugout with the team.  After the game we would return to the athletic training room waiting for anyone to come in for treatment and treat anyone who needed it.  After the opposing team had left, we would then clean their athletic training room.  This was our final task for the night before we were dismissed.

Overall, we were able to learn and gain much experience during our summer internship.  We are thankful to have had the experience to work with such great staff and team and for everything we have learned from them.

Students in the Saint Louis University Athletic Training Program have a required internship in the summer between their two professional years in the program.  This blog post details a student's reflection on their internship experience.