Studying in the Center of It All!
by: Maggie Meier, Athletic Training Student
SLU MAT Class of 2013
Bonjour! I traveled to Geneva, Switzerland for my fall semester junior year. I tried to take full advantage of all the amazing travel opportunities while aboard, traveling to France, Germany, Italy, Vienna, Austria, Holland, Monaco, and Portugal.  My favorite part was trying all the different foods and wines. While abroad, I tried to say “yes” to everything new. I even ended up climbing a mountain, which was exhilarating.
The school I attended in Geneva was extremely diverse. I was amazed by the numerous multilingual students who considered the knowledge of language part of normal life. I made sure to take a French course while in Geneva to become more confident with my ability to speak French.
While in Geneva, I had the opportunity to shadow a physician. The holistic approach to medicine made me realize how important it is not to just focus on an injury and fixing it, but to make sure underlying problems are not causing that injury and focus on prevention.
Food and exercise also play a major role in European health.  People go shopping everyday and only buy fresh food to prepare for the day. I soon became accustomed to buying bread fresh everyday from the market. The markets sold considerably less junk food because there is not the same demand for those products in Europe. Also, Europeans walk everywhere.  I was unprepared for the amount of walking, and I soon realized bringing high heels for going out was a mistake.
I loved my study abroad experience, and I hope to incorporate what I learned about healthcare in Geneva into my future profession.  I am so lucky I had the opportunity to study abroad and recommend it to everyone. It was seriously one of my best experiences ever.
This is one of several posts featuring SLU AT Student study abroad experiences.  Because of its 3-2 format, the SLU AT program gives students a unique ability to study abroad.  For more information about study abroad experiences at SLU go to: http://www.slu.edu/x26920.xml .
No comments:

The new facility additions to Saint Louis University's Medical Center Campus are really making progress....they seem to be on target for completion by the Fall of 2011.(click on photos to view more detail)

I went to Madrid for my study abroad semester. I went the first semester of my Junior year; as that is the semester that is set for most Doisy students to study abroad. Though it was a lighter credit-wise workload, it did not mean that I learned any less from it all. I was challenged in my classes and truly felt it helped develop my holistic education. I enjoyed my professors in each of my classes and gaining a new perspective about the coursework. It was also beneficial to meet new students and learn from their experiences. Overall, studying abroad was one of the best experiences I have had not just while in college but in my life thus far.

While in Madrid, I had the pleasure of taking IPE 350: Healthcare Systems and Promotion. Due to the critical topic, engaging class, but most of all the inspirational professor, it easily became my favorite class in college. The class was half lecture half discussion, but the lectures themselves turned into discussions with all of the analytical questions that the professor would pose. The way to do well in the class was not to just do the work - it delved deeper than that by having students think critically and on a global-scale.

Analyzing the healthcare systems worldwide sheds some new light on our own healthcare system in place in the United States. Learning about the other systems in this class became a compare and contrast session where different viewpoints were scrutinized and issues were tackled. Looking at the these systems from this macro perspective helped in understanding the social justice and global issues that face our world today.

I am a Junior in the Master's of Athletic Training program at Saint Louis University. Though my experiences thus far at SLU have done everything to exceed my expectations, my study abroad experience truly encapsulates the reasons why I have thoroughly enjoyed my college experience. I am now a firm believer and strong advocate for students studying abroad in college when given the opportunity.

A Semester Down Under
by: Libby Deiters, Athletic Training Student
SLU MAT Class of 2013

Oui Mate!! I don’t even know where to begin when I describe the amazing sights that I saw while living in Australia for four months; from the Great Barrier Reef to the Opera House in Sydney. When I first decided to study abroad I was so nervous and never thought that I would be able to last across the world from everyone. I soon proved myself wrong. I loved every minute of it and not a day goes by that I don’t wish I could turn back time and do it all again! While in Australia I went skydiving above the Western most tip of Australia while looking 300 miles down the coast, I went scuba diving at four different spots on the Great Barrier Reef, and I played with over fifty kangaroos. That doesn’t even do justice for all the other beautiful places that I visited.

While I was in Australia I was also asked to participate in the Australian University Games I played basketball for Bond University, my host school. I was one of the three Americans that were asked to play in the whole tournament. Playing basketball in another country has allowed me to see the differences between American and international basketball, for example we played on a  different size court than we have here. This experience gave me the opportunity to see how other countries view sports medicine and also gave me a chance to observe the environment that other athletic trainers worked in. In Australia their major in athletic training is called Physiology and their role is mostly in rehabilitation rather than focusing on preventative measures.

My one piece of advice for every college student who is given the chance to study in another country: DO IT, you will NEVER regret it! Study abroad has allowed me to not only learn about another culture, but also learn a lot about myself and I can say that it has impacted my future as an Athletic Trainer, I now feel more confident when asked to work with other cultures traveling to another country has allowed me to see the wide range of environments that we are able to work in. One day I hope that I return to Australia working as an Athletic Trainer.

SLU AT Students Get a Major League Experience

On Tuesday, April 19, 2011, SLU AT students were able to tour the St. Louis Cardinals facilities at Busch Stadium.  The tours were conducted by Greg Hauck, the Cardinals Head Athletic Trainer, who allowed the students to get a real feel for life as a major league baseball athletic trainer.  The tours included the Cardinals clubhouse, the strength training facility, the athletic training facility and the home dugout.  Due to the growth of the SLU AT program, there had to be 2 tour groups and Mr. Hauck generously gave of his time to lead both tours and talk at length with the students.  It is truly great to have such an organization and facility minutes from our campus! 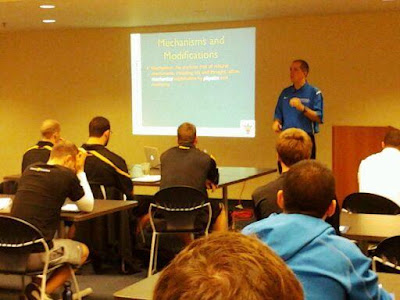 Hosted by the SLU Strength and conditioning staff, some of the other presenters included strength coaches from Boston College, the US Naval Academy, the Indianapolis Colts and the St. Louis Rams.  The SLU Athletic Training Education Program also provides students with the necessary experience and coursework to gain the CSCS credential.

PBS's FRONTLINE examines the risks of high school football and the important role that athletic trainers play in minimizing that risk.

Corporate sponsorships, nationally televised games, minute-by-minute coverage on sports websites -- for players, parents and coaches, high school football has never been bigger. But is enough being done to ensure players' safety as the intensity of the sport grows? In Football High, FRONTLINE investigates the new face of high school football.

Football observers and sports journalists alike agree that on average, high school players' size, speed and strength have increased dramatically over the past five to 10 years. At Euless Trinity in Texas, which has been ranked the No. 1 high school team in the country, 18 of the 89 varsity players weigh over 250 pounds. "The ramping up of pressure on high school kids ... and the increase of media attention on high school football, my God, in the last 10 years, it's become like a little NFL," says Gregg Easterbrook, a writer and columnist for ESPN. "If you look at it position by position, you can only compare it to NFL teams," says trainer Kelvin Williams. "It's just crazy. They are huge."

FRONTLINE centers its investigation in Arkansas, where two players collapsed from heatstroke last year while practicing during one of the hottest summers on record. The players were placed in the same intensive care unit in Little Rock, both having suffered extensive damage to their internal organs. One boy survived, but the other boy died in the hospital three months after his collapse. "There should never, ever be a person [dying] from exertional heatstroke, because it's 100 percent preventable," says Dr. Doug Casa, a leading expert on heatstroke.

In the wake of the tragedy in Arkansas, FRONTLINE investigates the differences in the two boys' fates. Only one of the boys' teams had an athletic trainer on staff, which reflects the reality in most of Arkansas: Only 15 percent of the schools in the state have a certified medical professional at games and practices, slightly below the national average.

The program also investigates the estimated 60,000 concussions suffered each year by high school football players. In 2010, researchers discovered a degenerative mental disease in the brain of 21-year-old Owen Thomas, a University of Pennsylvania football player who committed suicide last year -- and had never reported a concussion throughout his football career. Thomas' brain showed evidence of CTE, or chronic traumatic encephalopathy, the same mental degenerative disease rampant in the brains of NFL players with serious mental problems. "It has totally changed what I thought about this game," says VA researcher Dr. Ann McKee. "Anybody who's playing the game, this could happen; this could be the result."
No comments: