This year's theme is "Sports Safety is a Team Effort".  Our program has many things planned for National Athletic Training Month.  We will post them regularly on this site!
No comments:

SLU is only local university named to President's Higher Education Community Service Honor Roll-With Distinction.
Talk about being on a roll.
For the third consecutive year, Saint Louis University has made the President's Higher Education Community Service Honor Roll.
But for the first time, SLU has been listed with "distinction" -- a more exclusive list that includes no other schools from the St. Louis area and only four other Jesuit institutions.
Released Feb. 25, the national honor roll recognizes the exemplary service efforts of 736 colleges and universities in the United States. Only 115 institutions were given distinction honors.
Launched in 2006, the President's Higher Education Community Service Honor Roll is the highest federal recognition a school can achieve for its commitment to service-learning and civic engagement.
The national program also puts special emphasis on efforts to assist disadvantaged young people, something University President Lawrence Biondi, S.J., says SLU does quite well.
"We have been educating young minds for nearly two centuries, so reaching out to at-risk youth in our area is part of who we are and what we do," Biondi said.
And SLU reaches out in a big way. Among its numerous ongoing efforts, more than 300 students serve as Big Brothers and Big Sisters — no other organization in eastern Missouri has as many "bigs."
There are also special events throughout the year, such as SLU Make a Difference Day, which in October attracted 2,554 student, faculty, staff and alumni volunteers. They were joined for the first time by hundreds of alumni participating in cities across the country.
Overall, the figures are even more staggering. Although final figures are still being tallied, it appears that the total number of service hours for 2009 may eclipse one million for the first time in University history.
Kent Porterfield, Ed.D., vice president for student development, calls these numbers astonishing and inspiring.
"Our students come to campus on the first day ready to serve," Porterfield said. "Through numerous programs and efforts, we turn their enthusiasm for service into a lifelong passion."
At Saint Louis University, service goes far beyond volunteering; it's at the heart of a SLU education. For example, more than 80 of the University's courses directly integrate community service into academic content.
"The entire SLU experience -- guided by our Catholic, Jesuit mission -- transforms learners into leaders, volunteers into advocates, and idealists into agents for real and lasting change," Biondi said.
To further its commitment to service, SLU last fall launched the Center for Service and Community Engagement, which, among other things, is working to promote greater synergies between academic learning and community engagement.
More about the President's Higher Education Community Service Honor Roll
The national honor roll is jointly sponsored by the Corporation for National and Community Service, the Department of Education, the Department of Housing and Urban Development, USA Freedom Corps and the President's Council on Service and Civic Participation.
Related Links
No comments:

Saturday, February 13th was a fun day on our campus!  Since it was Mardi Gras, many SLU students took shuttles to Soulard to enjoy one of the midwest's largest parades and celebrations at 11:00 am.
CLICK HERE TO READ MORE ABOUT MARDI GRAS IN ST. LOUIS 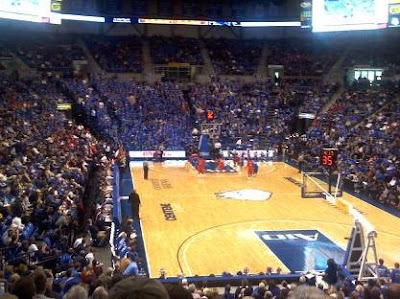 The exciting day continued at Chaifetz Arena where the Billiken Men's Basketball team hosted the Dayton Flyers at 3:00 pm.  It was "Billiken Blue-Out" day and the first 6000 attendees received blue t-shirts.  The students section was loud and proud as they Billikens prevailed in double overtime!
CLICK HERE TO READ THE GAME STORY AND SEE THE GAME PHOTO GALLERY
CLICK HERE TO SEE A CELL PHONE VIDEO OF THE STUDENT SECTION DURING THE PLAYER INTROS
No comments: 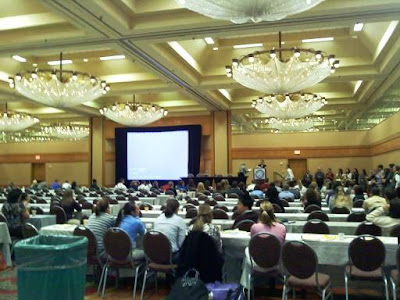 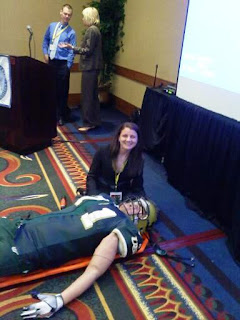 One of the highlights, was "Linebacker Stan", a high fidelity human simulator dressed in football equipment that helps athletic trainers practice with on-field emergencies.
No comments: