SLU AT Program Director Presented With Award at MoATA Meeting 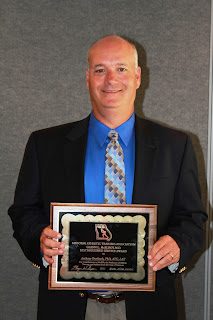 Dr. Anthony Breitbach, Director of the Athletic Training Education Program at Saint Louis University, was presented with the Glenn L. McElroy MD Distinguished Service Award by the Missouri Athletic Trainers Association at the MoATA Annual Meeting at the University of Central Missouri in Warrensburg, MO on June 2, 2012.
Dr. Breitbach was the 2011 recipient of the award, but was unable to attend that ceremony, so he was presented the award in 2012 along with the 2012 MoATA award recipients.  Stefanie West (Columbia) was honored as the 2012 McElroy Award winner and Michelle Padgett (St. Louis) was honored as the 2012 Missouri Athletic Trainer of the Year.
It was also announced that the 2013 MoATA Annual Meeting will be hosted on the campus of Saint Louis University on May 31st and June 1st next year.