HAPPY NEW YEAR FROM THE SLU AT PROGRAM! 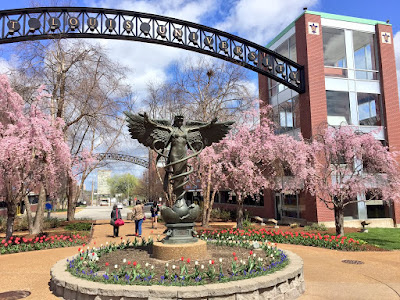 The faculty, staff and students of the Saint Louis University Athletic Training Program wishes you a happy and successful New Year!

We are reposting, because they are even more appropriate for 2017:

2.) Always give everyone the benefit of the doubt. After all, why not? Everyone is carrying around some sort of burden. Usually one that you don't even know about. So give them a break. Even if they're being unreasonable....

3.) Especially when you're talking about them with someone else. Honor the absent, as the saying goes. Spiritually speaking, it's essential. It's part of charity. Practically speaking, it makes sense too. Why? First, because you'll feel crummy about yourself afterwards. Second, because the person you're complaining to will probably see you as negative. Finally, it will inevitably get back to them. More to the point, it's mean.

4.) Don't be a jerk. There is simply no need to be. At all. Zero. Just because you're having a rotten day doesn't mean you have to pass it along your misery to someone else. It's important to share your struggles with friends. Essential. But being in a bad mood is no excuse to be a jerk. If you feel your moving into that territory, ask yourself a simple question, "Am I being a jerk?" If you're somehow unable to discern that, the look on other people's faces will tell you.

5.) Give a call, pay a visit, or send a note to someone who is sick, lonely, struggling. It will cost you nothing, but will mean everything to them. Think of how you feel when someone reaches out.

6.) Release yourself from that grudge. In other words, forgive. It's ridiculous to hold onto things for so long. It eats away at you like a cancer, and it poisons the other person's life. It also, most likely, serves to turn them against you even more. You think you are justified in being mad? You probably are. People can be jerks. But there are probably people justified in holding a grudge against you, too. So just let it go.

7.) Stop being so sarcastic. A little of that goes too far. You may think you're being Oscar Wilde, but you're often just being mean. Sarcasm can be an effective antidote to pomposity, but sometimes it's just cruel.

8.) Listen patiently to someone who is long-winded, or boring, or, especially. complaining. They're usually insecure, lonely or in pain. Your listening is a gift to them. It may mean that you're the only person they have to talk to. Yes, it's hard. But God sees what you're doing. And, after all, people have to listen to you.

9.) Help someone who is really needy. A homeless person. A poor person. A refugee. A sick person. A grieving person. It's not hard to figure out how to do it. And if you don't know anyone like that, write a check. That's not so hard either. Helping doesn't require an advanced degree.

10.) Be kind. Did I mention that? It bears repeating, because if you are kind, then you'll make a lot of people happy in the New Year. Yourself too. And God.