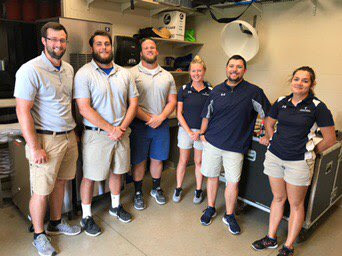 What can we say about Missouri Baptist University? The first thing that struck us was the almost overwhelming number of modalities that they have available to use in their athletic training room. Essentially, if you could dream it, you could get your hands on it at MoBap. The wide range of modalities has helped us to develop our rehabilitation skills on multiple levels, from simply using an innovative Normatech machine, to more complicated things such as doing a combination of stim and ultrasound. It is obvious that MoBap does not shy away from advances in medicine, as any modality that has proven benefits is used, no matter how recently it was discovered. Clearly there are the simple things such as bags of ice, but then there are also the more recent modalities such as the aforementioned Normatech machines, which deal with intermittent compression, as well as fire-cupping. It was extremely beneficial to the three of us to have all these modalities present at our first clinical site, because now we are proficient across the board is the use of them.

The other thing we came to love at MoBap was building the relationship with the athletes. When we first arrived, we had two long weeks of two a days where we did not know any of the players, nor their mannerisms. As we have built our relationships with the players, we have come to realize when an athlete is just being himself, or when he is actually hurt. We also found that the stronger our bond became with the athletes, the more easily they trusted us with what we were asking them to do, no longer being skeptical of who we were or if we actually knew what we were doing. That was one of our barriers initially, as we are the same age or barely older than some of these athletes, so they could not necessarily trust that we had the knowledge in us to properly treat them right off the bat.

In summary, we have gotten a great idea of what it is like to take care of athletes at the college level, as well as how important it is to build a strong bond with your athletes so that they trust you with your care. College level athletics are taken much more seriously than high school, and it shows in how the athletes expect to be treated for quick return to play from injuries, as well as the vastly larger time commitment that is involved with taking care of a college-level athletic team as compared to what some high school teams require.


This is one of a series of posts by the Saint Louis University Athletic Training students featuring their clinical site and their preceptors. The number, quality and diversity of clinical instruction are major assets for the SLU AT Program.