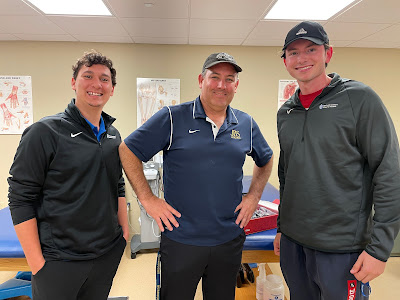 New PY1 AT Student Blog Post - Justin Epperly and Brandon Pavon (MAT Class of 2024)
Justin Epperly
This spring semester has been the beginning of our transition into the professional years of our Athletic training program. When we started observation hours it was equally exciting and nerve-racking, but after visiting John Burroughs, Washington University, and Fontbonne I realized there was much more to be excited about than nervous. It was very interesting to see the similarities across each clinical site and the minute differences such as scraping, taping techniques, and the use of cupping for examples. Not only were some of the therapeutic modalities different, but so were the spaces and overall environments. It was very interesting to see the part of being an AT that is not focused on as much. When I was not watching patient care, we spent our time talking with the athletic directors, coaches, and other athletes. This whole experience has really shed some light on the importance of the bond between the AT and those we work around. We truly are the connection from athlete to the school and sometimes the coaches.
During my observation hours I was fortunate to shadow Eldwin Neritani and Muharem Komic at Wash U; Lauren Swords and her preceptor Sammie Hochmuth ATC at Fontbonne; and Olivia Mani, Katie Wissing and their preceptor Dean Tiffany ATC at John Burroughs. I was also fortunate enough to have some of my fellow AT classmates shadow with me, shout out to Sha Jones, Brandon Pavon, and Marissa Uecker. However, one of my most memorable learning experiences came to me when I was shadowing at John Burroughs alone and one student dislocated his shoulder. I had never seen a dislocation or reduction of any kind so this was an amazing opportunity to witness something that one would not normally get to see. Luckily the student’s shoulder was reduced, and he was alright. Another memorable experience was also at John Burroughs with my fellow AT classmate, Brandon. Being our last day, we were able to try cupping…. Not on anyone else of course, but Olivia offered to cup our backs. This was a great learning experience because cupping, while it is not accepted everywhere, is a growing modality that many athletes enjoy. I think it was very beneficial to understand how cupping works and feels for my future as an AT, and for that matter, I think my time as a whole, at all the clinical sites I visited, were critical in my development as a future AT and have sparked excitement for my future!
Brandon Pavon
Starting this clinical observation process I was pretty nervous because this was the closest, I’ve been to seeing what it would be like to actually be an athletic trainer. Throughout my time at multiple different clinical sites, I was able to get a feel of how the different environments operate and how they vary from place to place. I mainly got to see the difference John Burroughs High School and DeSmet Jesuit high school. While the training rooms themselves vary drastically, the day to day very a lot too. At DeSmet, which is a all boys school, we mainly talked to the coaches before practices as well as watched the varsity volleyball team practice. At John Burroughs we saw a lot more students as they are required to take a sport along with it being a coed school. With the fall sports games starting around the time I went to John Burroughs I was also able to watch more games compared to my visit to DeSmet where the games had not started yet.
Justin and I have been to John Burroughs High School a couple of times now with Olivia, Katie, and Dean as the preceptor. Each time we went Dean has been super welcoming and helpful. There was one time Dean was taping an ankle and his technique was different than the one we learned from class so he was explaining to us why he does it the way he does. There was also some other times where Dean would be taping an arch or shin splint and he was explaining what happened to the person and why they needed this kind of taping job. It is experiences like these that lead to a further passion in this profession
This is one of a series of blog posts written by students entering the professional phase of the SLU AT Program as a part of MAT 3000 - AT Student Development II.